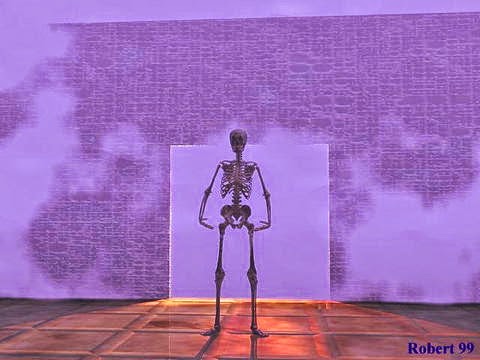 They're Not Always Malignant!!!
By Davida

I'm writing my story to encourage people not to worry too much while awaiting a confirmed diagnosis. Sometimes there's a happy ending

One day, I visited an orthopedist because of pain in both my knees. X-rays revealed a minor problem with the kneecaps, but they also revealed a 4 cm tumor in my distal right femur. I was told it was probably a benign enchondroma which rarely becomes malignant, and as long as there was no pain, I shouldn't worry about it.

Unfortunately, three weeks later my leg started to hurt more. At first I told myself it was unrelated to the tumor, and perhaps I had simply injured myself during exercise, in which case it would soon heal. But four weeks later, the pain was keeping me awake at night.

I did some research and learned that dull, persistent, night-time pain is one of the primary indicators of malignancy.  At that point, there was reason for concern, so I was sent for an MRI.  It revealed an uneven uptake of the contrast dye, indicating a possible chondrosarcoma.

I then consulted with two orthopedic oncologists who both agreed the tumor should be removed. They said that a biopsy should not be done with this type of tumor because if it were malignant, there's a risk of releasing those cells into the body.  I was also told that it's difficult to differentiate a benign enchondroma from a low-grade chondrosarcoma because even with xrays and scans, they tend to look the same.  So the surgery was performed as if it were a known cancer. The surgeon carefully scraped out the tumor, then used a heat tool to burn the bone cavity and kill any remaining tumor cells.


I had the tumor slides sent to the Mayo Clinic Pathology Lab because they have extensive experience in studying bone tumors. The pathologist studied the tumor slides plus the MRI films, and I received good news: The tumor was benign!


Rich - Chondrosarcoma of Pelvis - Sacrum
My tumor was on the left side of my sacrum. My sacral nerves (S2-S5) on the left and S5 on the right were removed along with laminectomies at the lumbar spine (L4-L5) to remove nerve roots. I haven't experienced or remember experiencing post surgical pain caused by the tumor removal because of this. I have permanent numbness that has lessened over the years on the left side of my butt, part of my groin, and down my left leg to my knee. Those nerves taken also affect my bladder. I thank Dr William Shaffer for doing such a great job on the spine part of my surgery.

A few words of wisdom about "Scanxiety"
By Annie
Regarding following up with scans after your first surgery.

Chondrosarcoma is both a physical and mental monster. From now on, you're gonna spend your time between scans looking over your shoulder to see whether or not the monster has come back to torture you again. I'm sorry to be so blunt but that's how my life had been. It helps that I've got a good cancer counselor who has helped me be less negative.

Just because you get the tumor removed and you are cancer free doesn't mean it's over. Remember, the scans are so important and can't be overlooked or ignored! You're fighting a battle for your life now and the scans are your best weapon. That and keeping a positive attitude that it won't beat you.

Don't go it alone. Don't go have the scans by yourself. Family and friend support is good and necessary when your going through this battle. I'm sure they want to be there for you. Please let them. You don't have to all sit around discussing the issue. You will find other ways to entertain yourselves. Go to lunch or a movie or something after getting through the day. It's the best way I know to give some enjoyment after the stress." 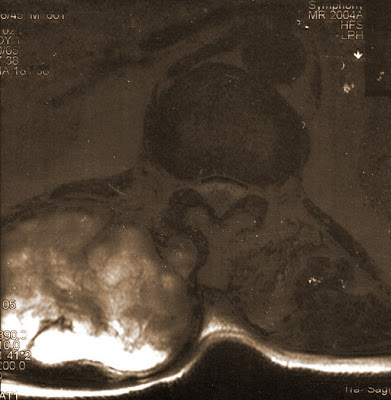 From Northamptonshire, ,
Alan, was diagnosed with chondrosarcoma in his Lumbar spine, and treated by the sarcoma Multi-Disciplinary Team at Royal National Orthopaedic Hospital. He had surgery in December 2005. His tumour was quite large, he says, “bigger than a pint of beer!” (remember  pints are a different size than US pints.) Though having Chondrosarcoma is rare. (An average of 90 patients a year are diagnosed in the  according to the World Health Organization) Alan has the dubious distinction of having Chondrosarcoma as a second cancer. His first cancer, unrelated to Chondrosarcoma, was in 1982. For that, he received radiation.

After his chondrosarcoma surgery Alan had a routine chest X-ray which showed three 'spots' on one lung. This frightened everyone.  scan further revealed, however, that there was nothing to worry about - it was clear. There was much relief all round.

"I mention this occurrence, so that anyone reading might keep in mind the inconsistencies of medical diagnostics. Though frightening at times, keep a level head, and wait until a final consensus. Medical science is not as exact as people might think." 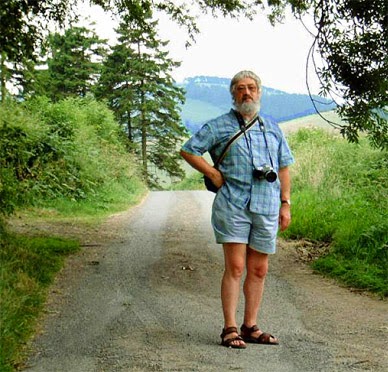 Post surgically, Alan has had to deal with some loss of his previously normal activities. Some muscle from one side of his back was removed with his tumour. And he has been in physiotherapy and  hydrotherapy to help with recovery. Alan uses a walking stick which was presented to him by the Minister for Education of the  (not everyone can say THAT). And now, conveniently, he has it to use.

Though Alan has had the previous cancer, and later, he had the Chondrosarcoma, he sure has a reassuring way of giving himself (and others) a morale boost. "It might take a long time to improve - and it may not get back to how it was - but every day is a bonus. It could have been a whole lot worse!"

Barbara's husband, Raj, was told in 2009 he had Chondrosarcoma by some very highly qualified doctors in Los Angeles. It took a series of MRI's, x-rays, CT scans, and a full body bone scan to come to a conclusion on the possible "differential" diagnosis. All the scans were pointing to chondrosarcoma of the ischium (one upper half of his pelvis).

Barbara and and Raj were devastated to realize the ramifications of this. They were told Chemo or radiation would not affect it. What would this all mean for their future? Would he be disabled? If the ischium were surgically removed, how would his body function? Would she have to take care of him at home? How would she be able to keep working? Would their insurance cover everything? Would he ever walk again? Or work? Would he survive? These questions can seem terrifying. Raj and Barbara decided to face every issue head on and make plans to deal with possibilities just in case.

But, even with all their concerns, there is a happy ending. They learned that all the scans had not been quite enough to clarify the diagnosis on their own. Chondrosarcoma is difficult to sort out from other conditions sometimes. It is a slippery character. It is necessary to verify diagnosis by having a biopsy. No matter what the radiologist says it is. The pathologist must further verify it. A biopsy was performed and they awaited the results.

Barbara almost couldn't believe it. She and Raj had the BEST news anyone could EVER receive--the pathology reports (both Cedars-Sinai and City of Hope located in Southern California) said that the lesion in Barb's husband's ischium was a benign bone cyst and NOT chondrosarcoma after all! These types of cysts are typically found in children and teenagers, not in adults. So that was why it might not have been considered as a possible differential diagnosis when first investigating Raj's scans.

Barbara says, "For those who are in the first steps of diagnosis, please understand that it is so important to work with your medical team, to follow through with all testing, to request copies of those scan and biopsy reports, to get a second opinion, and to wait until you find out exactly what is going on before you lose hope. There just might be that small percent of a chance that it is something else.

Still, they took the initiative of seeking out one more (third) opinion and had the biopsy slides sent to another pathology lab just to be sure. It is no insult to the doctors to do so, and they helped to facilitate this. One should not be afraid of hurting a doctor's feelings over getting another opinion. We are all entitled to do so, and it is a wise move. Remember, Chondrosarcoma can be difficult to diagnose even with the experts.

It doesn't always hurt!
Rick H - Pelvis, Grade II
Surgery 3/2005 Internal Hemipelvectomy
I was diagnosed with chondrosarcoma on my right pelvis on Nov 2004 at the age of 48. I had no symptoms or pain and had remained very active running, skiing, etc. right up to my surgical date.

My chondrosarcoma originated from my right ischium (sitting bone) and progressed very close to my sacrum with a diameter up to 10 cm. about the size of a grapefruit. Of course my bowel, bladder, nerves and other internals had been displaced. Dr. Weiner of Summa Healthcare in Akron. Ohio provided my initial CS diagnosis and was very surprised by my lack of symptoms.

My initial biopsy indicated a low grade (1) chondrosarcoma that has probably been in place for many years. The post surgical biopsy changed the grade to a 2. Subsequent CT scans and MRI's did not detect metastasis prior to the surgery. And 1 year later I am still clear.

My surgery was March 15, 2005 at the Cleveland Clinic with Dr. Kenneth Marks the orthopedic oncologist leading the team. Several other surgical teams were in place to deal with colon and bladder issues which were expected. The complexity of the surgery was more than Summa surgeons were willing to tackle, hence the Cleveland Clinic. A Blessing!

The chondrosarcoma was excised with the removal of my right ischium, pubic bone and 30% of my acetabulum (hip socket) along with my right obturator nerve. The tumor was 4 pounds in mass and turned out to be about the size of a coconut. The surgery took 7 hrs and required 10 units of blood and 21 liters of other fluids to stabilize my losses. The surgeon felt that good margins were obtained in the removal. No prosthesis, mesh, or any other foreign objects were used to repair my pelvic area. I was in the hospital for about 16 days, with the last 5 focused on physical therapy. I understand that some people have shorter recoveries, but It took me about 2 months to begin walking without crutches or a cane.

Many prayers and blessings were bestowed on me due to the fact that NO other surgical complications came into play. My bowel and bladder are ok and functional, and no additional nerve damage was done. Note that, of course, my right side lower abs, hamstring and adduction muscles have been cut and leave me with some bit of disability. Now I walk without assistance and barely a limp and I have maintained a 3 day per week workout at the gym. My cushiony RoHo pillow allows me to sit for a full day in comfort at my computer job.

Thank You for Visiting

This material should not be used as a basis for treatment decisions, and is not a substitute for professional consultation. It is further recommended that patients and laypersons looking for guidance among the sources of this webpage are strongly advised to review the information with their professional health care provider. ©Copyright 2001 - 2009 by Elizabeth Munroz
All rights reserved. Last updated: Jan., 2016

This site was created in loving memory of Raj A. Megha.